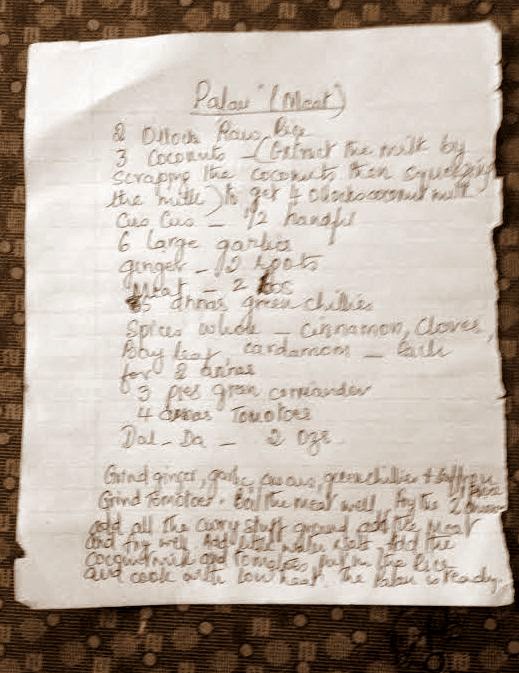 MY GRANDMA’S OLD HAND WRITTEN RECIPES FOR PALAU
I have a small collection of cookery books published in India in the late 1800s and early 1900s. There were scores of this type of book written for British housewives who were new residents in India. The books are mainly concerned with cooking British food under Indian conditions but some of the books include chapters on cooking curries, kebabs, koftas and  ‘PULOW” (which we now spell as “PALAU’)
I also have a good collection of hand written recipes on bits and pieces of paper that are now falling apart, that have been passed down through generations. There are many recipes where the quantities of ingredients for a particular recipe are mentioned as ‘3 pice ginger, 6 pice cuscus (Kus Kus), 3 pi e cuddalay, ½ anna coriander leaves,41/2 tin pots of water, etc etc. This was exactly how recipes were written in those early days only because, the ingredients for each meal / dish was procured or bought FRESH each day. The corner shops would sell the ingredients in small quantities and the house wife in those days would send the domestic help with a small chit stating the item to be purchased with the price (how many pies or annas) and the cooking would then start for the day. None of the fresh ingredients were bought in bulk and stored as refrigerators etc were yet to be invented. Only the Meat Safe and Doolies were used to keep cooked food safe from Cats and mice over night
In those days the quantities for each ingredient of a particular dish was specified by its price or in the vernacular weight. The “Tin Pot” for measuring water is the old Cigarette Tin that was used as a measure. I’m appending a photograph of a meat Palau from my grandmother’s collection where her quantities for the ingredients are a mix of all the old measurements of weight as well as in annas. I’m sure many of us have similar recipe books which our grand mom’s wrote in those early times bearing testimony to the long period of evolution that out Anglo-Indian Cuisine has passed through many hundreds of years to what it is today. Hats off to our ancestors! Just what would we have done without them if they hadn’t recorded for posterity, the pioneering dishes of our Community.
0
(Visited 4 times, 1 visits today)
Hand Written Recipes old handwritten recipes