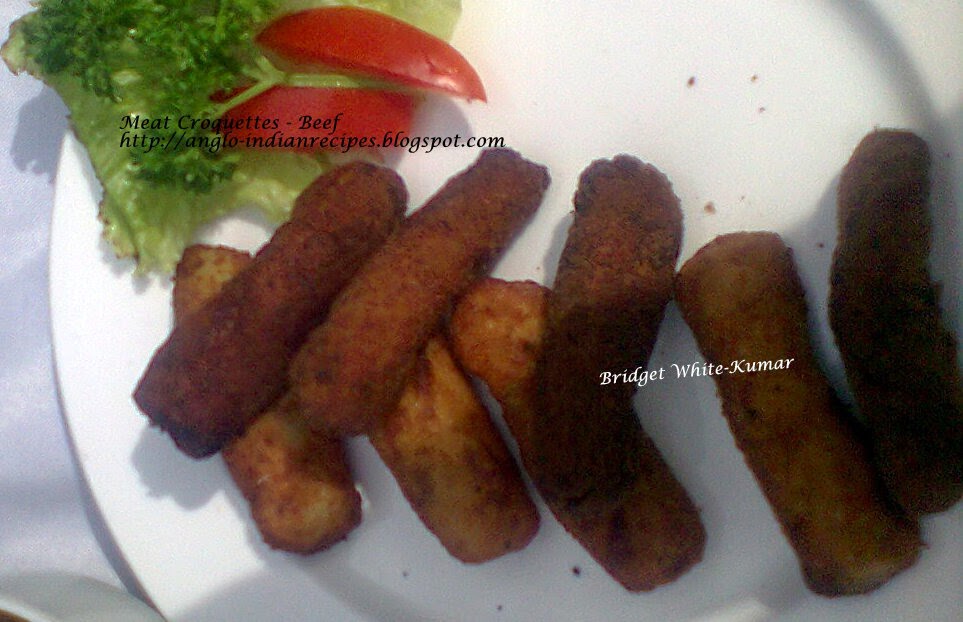 Beef / Lamb / Mutton Croquettes
A croquette is a small (bread) crumbed fried Roll containing, usually these main ingredients, i.e. mashed potatoes and and filling of one’s choice such as minced meat, (veal, beef, chicken, or turkey), fish, vegetables, boiled eggs, etc, flavoured with herbs and spices. The croquette is usually cigar shaped or cylindrical. It is then dipped in beaten egg, rolled in bread crumbs and then deep fried in hot oil. The term Croquette is derived from the French term ‘Croquer’ which means “to crunch”. Croquettes were therefore first invented by the French but gained popularity the world over and is relished as a dinner delicacy and also as fast food

Croquettes were introduced into India during the Colonial Period. The early Khansamas and cooks turned the leftovers especially Turkey and Chicken Roast leftovers into Croquettes. Initially the Croquettes were bland and insipid but over a period of time were given an Anglo-Indian touch with the addition of cumin, green chillies and turmeric in those early times.
Croquettes can be served as a finger-food or as an entrée accompanied by a dipping sauce. While the croquettes are usually fried they can also be baked. Either way, the crispy exterior of the croquette should perfectly compliment the moist and tasty filling inside.
Serves 6  Preparation Time 45 minutes
Ingredients
300 grams meat either beef or mutton cut into small pieces
3 onions chopped
2 teaspoons chopped mint
1 teaspoon pepper powder
Salt to taste
2 tablespoons tomato sauce
1 teaspoon butter
1 egg beaten
Yolk of one egg
3 tablespoons oil
3 tablespoons bread crumbs

Wash the meat and cook in a little water with some salt till soft. Remove from the heat and cool. When the meat is cold, shred into very small flakes. Mix in the chopped onions, mint, pepper, salt, sauce, butter and the egg yolk. Form into oval shapes and flatten with a knife. Heat the oil in a flat pan. Dip each croquette in the beaten egg, roll in bread crumbs then shallow fry on both sides till brown.
Drain and serve as a Finger Food or Snack  by itself or with mashed potatoes and steamed vegetables.

Note: Left over Roast meat or roast chicken, turkey etc can also be made into delicious Croquettes 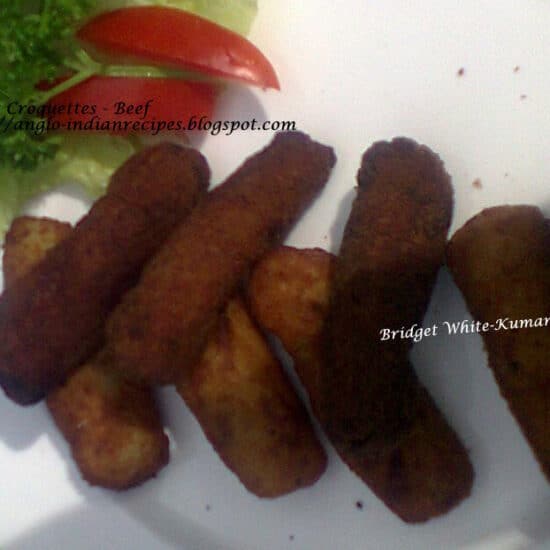