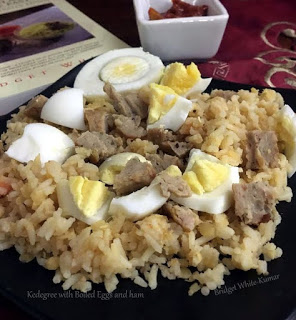 KEDGEREE WITH HAM AND HARD BOILED EGGS
Kedgeree is a mildly spiced rice and lentil mix-up which originated during the time of the British Raj. It is the anglicized version of the Indian Rice dish Kichiri or Kichadi and was prepared with rice, lentils, raisins, nuts, parsley, etc along with the addition of steamed Fish Flakes and hardboiled eggs. In the early days fillets or flakes of steamed or smoked haddock or Halibut made up the combination (but later Salmon, kippers or tuna was used instead). It made a hearty breakfast dish in the early days when it was considered healthy to have a cooked breakfast with all the essential nutrients.
During the time of the Raj, Fish, either steamed or fried was a regular item for breakfast and the local khansamas and cooks tried to incorporate it with local dishes. Eventually the Fish Kedegeree became a hot cooked spicy dish, with the addition of various spices and was invariably included in the breakfast menu all over the Commonwealth. It is still very popular all over the world.  Minced meat, boiled eggs, chopped ham, etc, could also be added instead of steamed fish.
It’s been also said that this dish ‘Kedgeree” was first introduced by the Scottish Soldiers in Army Camps in Calcutta.
2 cups raw rice
4 tablespoons oil
1 tablespoon ghee or butter
3 onions sliced finely
3 green chillies sliced lengthwise
½ cup Red Lentils (masur dal)
3 cloves
2 small sticks of cinnamon
1 teaspoon cumin powder
100 grams Sultanas or Raisins (Optional)
3 tablespoons chopped coriander leaves
2 Bay leaves
Salt to taste
1 teaspoon chillie powder
1 tablespoon lime juice / lemon juice / vinegar
6 whole peppercorns
4 hard-boiled eggs cut into quarters
½ kg good fleshy fish cut into thick fillets (The Fish could be substituted with Ham, boiled and shredded chicken, Cooked Mincemeat, etc.)
Heat the oil in a suitable pan and sauté the onions, cloves and cinnamon lightly.
Add the slit green chillies, whole peppercorns, cumin powder and chillie powder and sauté for a few minutes.
Add the washed rice and lentils and mix well.
Now add 6 cups of water, lime juice / vinegar, sultanas, chopped coriander leaves and salt and cook on high heat till boiling.
Reduce heat and simmer covered till the rice and lentils are cooked and slightly pasty.
Gently mix in either chopped ham, shredded chicken, steamed fish pieces, etc, along with the butter or  ghee and the hard-boiled eggs.
Cover and let the rice rest for a few minutes.
Serve hot or cold with any side dish or Lime Pickle. 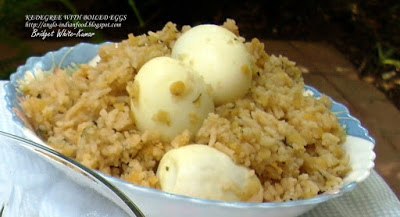