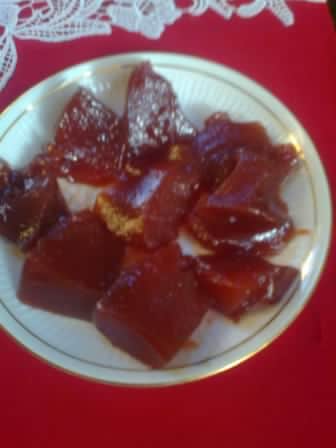 GUAVA CHEESE
Guava Cheese is a ‘Sweet Conserve’ made of ripe guavas and Sugar. It is a chewy Fudge like Sweet that is most always prepared at Christmas time. It is a cousin of the Portuguese desert ‘Goiabada’ or Guava Paste. It is also known as ‘Perad” in Goa. This is an old Anglo-Indian favourite and is relished by one and all.
As per Wikipedia “Goiabada”  originated from the Portuguese word ‘Goiaba” which means guava, is a popular dessert throughout the Portuguese-speaking countries of the world, dating back to the colonial days in Brazil, where guavas were used as a substitute for the ‘quinces’ that were used to make ‘marmelada or quince cheese’.
Ingredients
6 ripe guavas preferably the pink variety
¾ cup sugar
50 grams unsalted butter
½ teaspoon vanilla essence
A drop of cochineal colouring
Wash and cut the guavas into quarters and boil them well in a little water till nice and soft.  Mash well, then strain through a thin cloth and throw away the skin and seeds.
Boil the strained thick juice with the sugar and keep on stirring till the mixture turns slightly thick. Add the butter, vanilla essence and cochineal. Simmer till nice and thick. Pour onto a buttered plate. Cut into squares when cold.
This recipe is featured in my Cookery Bo0ok A COLLECTION OF SIMPLE ANGLO-INDIAN RECIPES
0
(Visited 10 times, 1 visits today)
Christmas Guava Cheese Guava Cheese