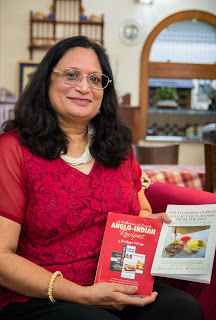 Bridget White Kumar, a chip off the old block has been carefully preserving Anglo Indian cuisine through her books and collaborations with the hospitality industry. Her desire to fuse her passion with the need to keep her legacy going had her formally tread this path with gusto from the year 2000 when she left her full-time job at a national bank. Here in the capital to help curate a winter menu at the only-of-its kind restaurant Anglow, she says, “I am happy to be a part of any endeavour that strives to preserve and promote the culture. It is nice to see a renewed interest in the cuisine that is close to my heart.” Bridget reminisces of her time growing up in the Mining colony of Kolar Gold Fields where the meals would be a staple of curries made of seasonal vegetables and meat, stews, “fugad” or stir-fried vegetables and milk pudding that was the ultimate “comfort food”. Later the family shifted to Bengaluru for better opportunities and she continued to cook and take pride in her roots, feeding all those who showed the narriest of interest.

She narrates that Anglo-Indian cuisine evolved over many hundred years was the result of reinventing and reinterpreting the quintessentially western cuisine by assimilating and amalgamating ingredients and cooking techniques from all over the Indian sub-continent. Thus a completely new contemporary cuisine came into existence making it truly “Anglo” and “Indian” in nature, which was neither too bland nor too spicy, but with a distinctive flavour of its own. It became a direct reflection of the multicultural and hybrid heritage of the new colonial population. The cuisine developed differently from region to region, according to the local offerings. Bridget enlightens, “Even when it comes to the oil, in Kerala the same dish could be made with coconut oil, In the North with gingerly oil and in places like Calcutta mustard oil.” Some of the familiar creations that became local culture would be the Railway cutlet or the Calcutta chops that are now almost street food.

With winters almost here, Bridget throws light on what comprises a typical “winter fare”; “Roasts, Soups, Stews, Baked Dishes and Casseroles made with meat. Fish and poultry are normally Winter Dishes using more of pepper, ginger, and root vegetables. Dry fruits and nuts are used in cakes and puddings.” Christmas time, of course, is that time when every family challenges their culinary skills. A typical Christmas lunch at an Anglo-Indian home, Bridget tells us would be “a large meal comprising of a Meat Pulao, Chicken Curry, Stuffed Roast turkey or Chicken Roast, Pork Vindaloo, Duck Vindaloo, steamed vegetables, mashed potatoes, bread, dinner rolls, Christmas pudding, cakes, sweets of all kinds, all washed down with a glass or two of Grape Wine, Ginger Wine or a peg or two of whiskey, brandy or other liquor.