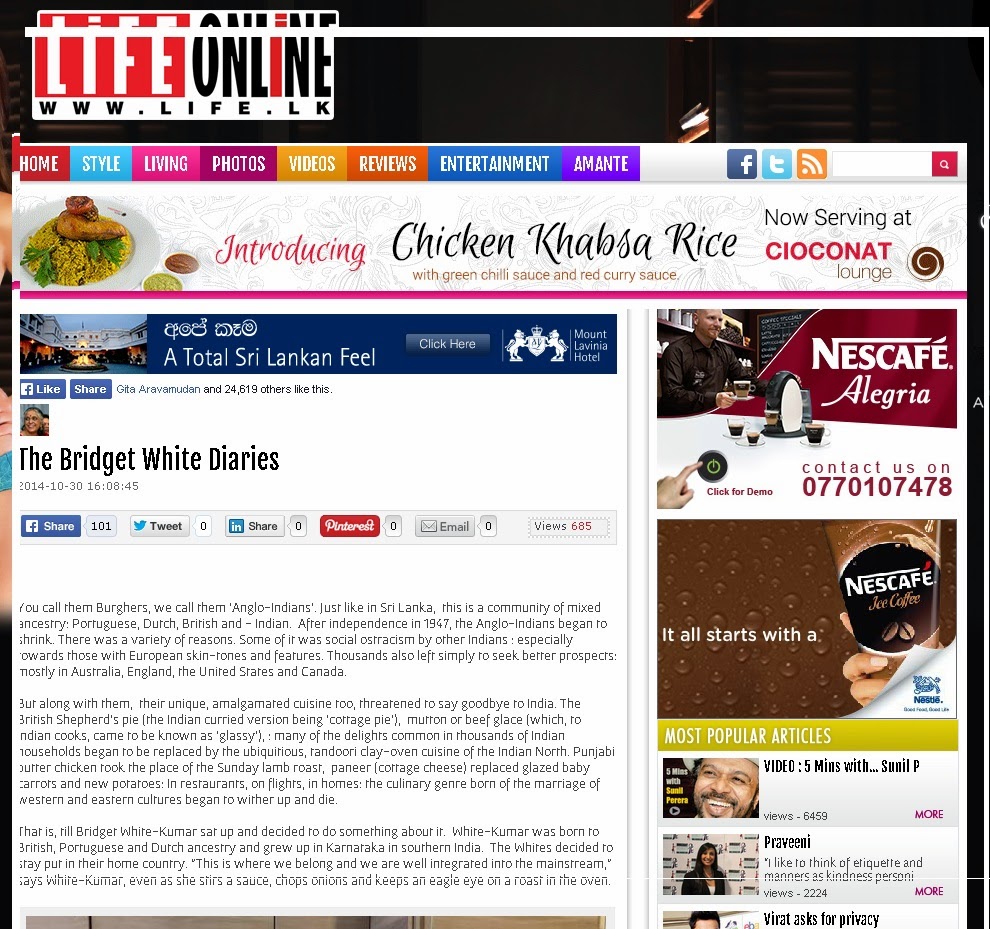 The Bridget White Diaries
- See more at: http://life.dailymirror.lk/article/9930/the-bridget-white-diaries-a-taste-of-history#sthash.EbzmjLzD.dpuf
You call them Burghers, we call them 'Anglo-Indians'. Just like in Sri Lanka,  this is a community of mixed ancestry: Portuguese, Dutch, British and - Indian.  After independence in 1947, the Anglo-Indians began to shrink. There was a variety of reasons. Some of it was social ostracism by other Indians : especially towards those with European skin-tones and features. Thousands also left simply to seek better prospects: mostly in Australia, England, the United States and Canada.

But along with them,  their unique, amalgamated cuisine too, threatened to say goodbye to India. The British Shepherd's pie (the Indian curried version being 'cottage pie'),  mutton or beef glace (which, to Indian cooks, came to be known as 'glassy'), : many of the delights common in thousands of Indian households began to be replaced by the ubiquitious, tandoori clay-oven cuisine of the Indian North. Punjabi butter chicken took the place of the Sunday lamb roast,  paneer (cottage cheese) replaced glazed baby carrots and new potatoes: In restaurants, on flights, in homes: the culinary genre born of the marriage of western and eastern cultures began to wither up and die.

That is, till Bridget White-Kumar sat up and decided to do something about it.  White-Kumar was born to British, Portuguese and Dutch ancestry and grew up in Karnataka in southern India.  The Whites decided to stay put in their home country. "This is where we belong and we are well integrated into the mainstream," says White-Kumar, even as she stirs a sauce, chops onions and keeps an eagle eye on a roast in the oven.

Her sprawling kitchen is like an impressive workshop, with every tool and implement needed by a master-chef.  After all and even though she is 62 and a grandmother, Bridget White-Kumar is not only a home-maker. She is also a food consultant to various five-star hotels across India and the author of seven best-selling recipe books on Anglo-Indian cuisine, whose condensation into one, UK-published volume, won her the 2012 Gourmand World Cook Book Award for 'The best culinary history book in India".

"Many of the older generation cooked from intuition and memory rather than from a written recipe," says White.  "In these days of instant mixes, few find the time for even a simple meal, let alone the traditional dishes of our forefathers. That's when I decided to compile the recipes and preserve the very unique heritage of our cuisine."

Even non Anglo-Indians who grew up in India's army cantonments of the sixties are die-hard fans of White-Kumar's commendable venture. Due to the great number of Anglo-Indians in military service, it is their cuisine that dominated club kitchens  From the quirkily named 'pepper water' to 'sheep's head curry', from 'trotters in gravy' to 'washerman's pie', White-Kumar's recipes evoke aromatic nostalgia and memories of kitchens filled with clouds of steam,  tantalizing spirals of spices and the pleasing sight of well-marinated cuts in old-fashioned 'meat-safes'.  It was an epoch of coalescence, of brown gravies and mango chutneys that gave the inherently contradictory occidental-oriental relationship an extraordinary and entirely tasty culinary genre of its own.
about:blank
White's collection includes selections dedicated to roasts, casseroles and bakes, snacks, egg delicacies but also one entirely for vegetarians and even recipes for home-made wines. Besides the modestly-priced collection of seven books (USD 10,- each) which can be ordered directly from White at bidkumar@gmail.com or bridgetkumar@yahoo.com,  the indefatigible and ever-smiling queen of the kitchen also writes a highly popular blog.

"Try my recipes," she says shyly, as she turns an upside-down pudding inside out, pineapples glistening and browned to perfection. "I promise you not only a gastronomic delight but also a rendezvous with history."