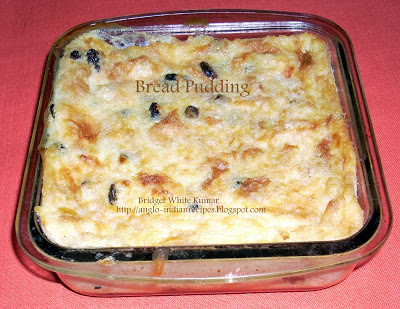 BREAD PUDDING – THE POOR MAN’S PUDDING
Bread Pudding is an old fashioned dessert that had its humble beginnings in the 13th century in England. It was first known as a "poor man's pudding" as it was created as a means of making use of stale left over bread for poor people to eat. It was just moistened in water, to which a little sugar, spices and other ingredients were added.  Today after it has passed through so many centuries, we think of bread Pudding as a Rich Treat. For those unfamiliar with this dish, (which I’m sure there aren’t many), bread pudding is typically made the British way, by soaking slices of bread cut into cubes in a mixture of milk, egg, and sugar; adding raisins and spices and baking or steaming the mixture. Actually its taste is not that much different from French toast, except more moist. Bread pudding can also be made into a Savoury dish as well by substituting sugar and raisins with chopped tomatoes, green chillies or capsisums / chillie peppers etc. You could experiment and make your own tasty pudding. Of course, one’s choice of bread, the addition of optional ingredients, and the details of preparation can make bread pudding into art form. Bread pudding can be made into a rich heavy dessert or just a simple light dish that even an invalid can digest. The possibilities are endless. Try out the recipes given below.
OLD FASHIONED BREAD PUDDING
Serves 6     Time required: 1 hour
Ingredients
3 cups Milk
8 slices of bread cut into cubes
200 grams butter
200 grams sugar
2 beaten eggs
1/4 tsp salt
200 grams raisins and chopped nuts
1 tsp vanilla essence
Heat milk to scalding, and pour over the bread cubes. Set aside to cool for some time then add all the other ingredients. Add more milk if too dry. Pour into a buttered baking pan or dish. Bake at 350 degrees for 40-45 minutes or until knife comes out clean. Serve warm with Ice Cream or Vanilla Sauce
The same pudding can be steamed in a pressure cooker as well.
(Visited 38 times, 1 visits today)
Article written by Bridget White-Kumar
Subscribe
Login
2 Comments
Oldest
Newest Most Voted
Inline Feedbacks
View all comments

You could steam it for around 20 to 25 minutes. Insert a tooth pick and if it comes out clean then your pudding is cooked. All the best

if the pudding is being steamed... how long do i steam it for? how do i check for doneness?