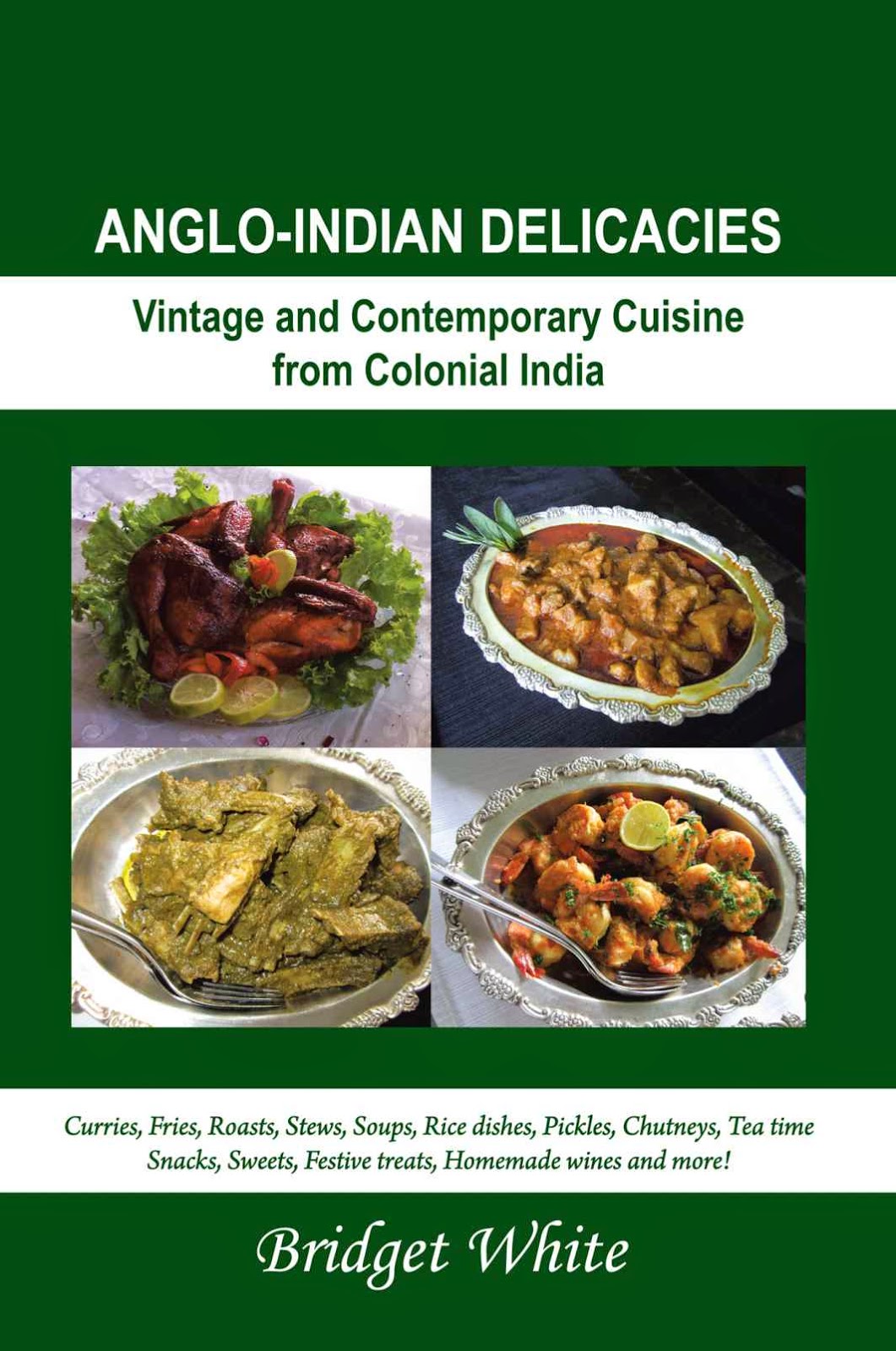 The new revised version of my book ANGLO-INDIAN DELICACIES published by Partridge India is available for sale on Flipkart. This is the link http://www.flipkart.com/anglo-indian-delicacies/p/itmduzy57yhzhkkh?pid=9781482801378&otracker=from-search&srno=t_1&query=Anglo-Indian+Delicacies&ref=2082e707-1a15-4bef-abe5-8a0424c93a82
‘ANGLO-INDIAN DELICACIES’ is an interesting assortment of easy- to- follow Recipes of popular vintage and contemporary Cuisine of Colonial Anglo India. It covers a wide spectrum, of recipes ranging from mouth watering Gravies and Curries, Pepper Water and Fries, Roasts and Steaks to tasty Pulaos and Pickles, Savouries, Sweets and Christmas treats,. A few home brewed wines are also included to round off the extensive flavours and tastes.
In this book I’ve endeavoured to cover some of the old typical dishes that were popular in Calcutta, and other parts of Bengal besides Central and Eastern India. Dishes such as Pork Bhooni, Chicken / Meat Jal Frezie, Devil Pork Curry, Calcutta Cutlets (Kobhiraji Cutlet), Fish Kedegeree, Double Onions Meat Curry (Do Piaza), Meat Glassey (Glazzie ) or Fruity meat Curry, Meat and Spinach Curry, Duck Dumpoke, etc, are some of the old favourites featured here. I’ve also included some recipes for dishes that were popular during World War II and were served in the Army camps and Officer’s Mess, such as the Army Camp Soup, Brown Windsor Soup, The Bengal Lancers Shrimp Curry, Veal Country Captain (Cold Meat Curry), Bubble and Squeak, One Eyed Jack, Colonel Sandhurst’s Beef Curry, Salted Tongue, Salted Beef, Corned Beef, Kalkals, Rose Cookies, Dhol Dhol, BeefPanthras, Potato Chops etc. All these dishes have been given a new lease of life, besides a host of other assorted dishes and preparations.
The new revised version of ANGLO-INDIAN DELICACIES has lots of new recipes in this edition. The groupings this time are: Soups and Pepper Water, Curries, Gravies, Fries, Side Dishes and More (which include Chicken and Poultry; Meat – beef, lamb and mutton; Pork, Fish, Prawns, Crabs and Eggs) Vegetarian Variety, Rice dishes, Anglo-Indian pickles and chutneys, Savaouries, Sweets and Festive Treats, Homemade Wines and some Basic Curry Powders.
The recipes in this book are simple and easy to follow and only easily available ingredients have been suggested. The easy-to-follow directions for preparing these old, popular, sumptuous dishes make cooking simple, enjoyable and problem-free. The pungency of the dishes can be reduced according to individual taste by reducing the amount of chillie powder, spices or pepper powder suggested in each recipe. All the recipes in this Book are for 6 generous servings. If cooking for a smaller or larger number, the quantities should be adjusted accordingly.The word “Everlasting”means ‘something, that once created, endures through time and never ceases to exist’. Anglo-Indian Cuisine is “EVERLASTING” and will endure forever and ever.
(Visited 1 times, 1 visits today)
Subscribe
Login
0 Comments
Inline Feedbacks
View all comments