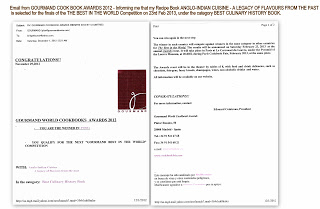 They will be sending me my certificate shortly for having won ‘WINNER IN INDIA’
This is the link to the GOURMAND website www.cookbookfair.com
(Visited 8 times, 1 visits today)
Subscribe
Login
0 Comments
Inline Feedbacks
View all comments