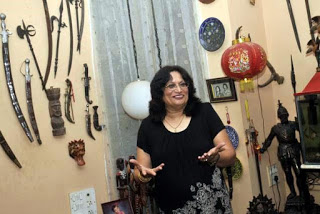 Bridget White-Kumar takes Mini Anthikad-Chhibber through the delicately spiced pages of history into a world of memsahibs, cucumber sandwiches, kedgeree and khansama

Stepping into Bridget White-Kumar's house just off the busy Koramangala Ring Road is to step into another world altogether. There are the flowering trees, plants, shrubs, lovebirds all flourishing in a riotous symmetry. The old world charm of the house with its glass showcases, the colourful aquarium with its plump, brilliantly-hued fish is an echo of Bridget's life-long project of preserving the Anglo-Indian legacy through its cuisine.

Having written seven recipe books including the latest, “Vegetarian Delicacies” and a book on Kolar Gold Fields, where she was born — “Kolar Gold Fields – Down Memory Lane – Paeans to lost Glory,” Bridget is doing her bit to see that a way of life does not pass off into the dusty pages of history.

“It all started when my daughter, Kusum, was going to England to study,” says Bridget with a smile. “I wrote her a small recipe book. The original little black book! There were recipes for regular cooking like rice, curries and snacks. When Kusum returned, she said all her friends had enjoyed the food. That Easter, while we were eating the traditional Easter lunch, my daughter said these recipes would die out unless they were recorded. That got me thinking and I set about collecting recipes.”
Collating recipes handed down from her mother and grandmother, Bridget soon had a wealth of information about Anglo-Indian recipes. “I sent the manuscript around and Roli Books showed interest. But it was all taking too much time. I decided to pick out the most famous Anglo-Indian dishes and publish it myself.”
And that is how “The Best of Anglo-Indian Cuisine – A Legacy” was born. “I tempted readers with the picture of classic Anglo Indian dishes — coconut rice, devil chutney and ball curry, on the cover,” Bridget says with a laugh. The book was a super success. The other books followed including “Flavours of the Past” with colonial favourites such as Railway mutton curry.
After her graduation in Kolar, Bridget came to Bangalore to do her B.Ed, which is where she met her husband. “He was my first cooking instructor! He taught me to strain rice. I asked my mother and mother-in-law for recipes. “Since my husband is from Guntur in Andhra Pradesh, known for its fiery cooking, and I am Anglo-Indian, my cooking was a fusion of the two. I started off with simple dishes and then graduated to more complicated recipes. My first big success was the biryani, which was not too bland nor was it too spicy or too rich. I realised ethnic cooking is dying out and needs to be preserved.”
About the legacy of Anglo-Indian food, Bridget says: “Roasts, stews, bakes, sandwiches and white bread, fish and chips, cutlets, croquettes, sausages, bacon, ham, egg variants, puddings, custards, became part of the Anglo-Indian culinary repertoire. The Sunday English breakfast of eggs, bacon and kippers, toast, cheese, butter, jams, and English roast dinners complete with steamed vegetables, roast potatoes, Yorkshire pudding and gravy, English sausages, colloquially known as bangers with mash, became very common in Anglo-Indian homes.” Anglo-Indian cuisine has a strong Scottish influence too. “The bread pudding, treacle pudding, mince and tatties, steak and kidney pie and of course kedgeree (kichdi) are a result of the cross pollination between cultures.”
Anglo-Indian food should not be looked at as a homogenous entity, Bridget says. “The recipes are an amalgamation of the tastes and spices of the region. So the Anglo-Indian cuisine from Bengal will have more sea food and mustard oil while the cuisine from landlocked Kolar would feature more meat.”
Bridget took VRS from Canara Bank after working for 23 years. She says she is busier than before. She started a blog on KGF “four to five years ago. Every time I visited, I saw the deterioration. I felt the nostalgia and the need to preserve the story of KGF for coming generations”. That is how “Kolar Gold Fields – Down Memory Lane – Paeans to lost Glory” was born. An easy read, the book effortlessly brings to life the world of dances, food and hard work.
As I look through Bridget's collection of recipes, written by her mum and grandmother on little pieces of paper and also flip through this rare, old book, “Original Madras Cookery” published in 1874 written by an anonymous British Resident's wife I am transported to a world of khansamas, mulligatawny soup, bone china tea services and delicately-sliced cucumber and chutney sandwiches. At my back I can hear the insistent hum of Koramangala traffic as it speeds down our very own information highway. It is however nice to sometimes take a break and indulge in some heavy duty Raj nostalgia.
Mini Anthikad-Chhibber
http://www.thehindu.com/life-and-style/metroplus/article2071072.ece?sms_ss=facebook&at_xt=4de87550968c3fe0%2C0